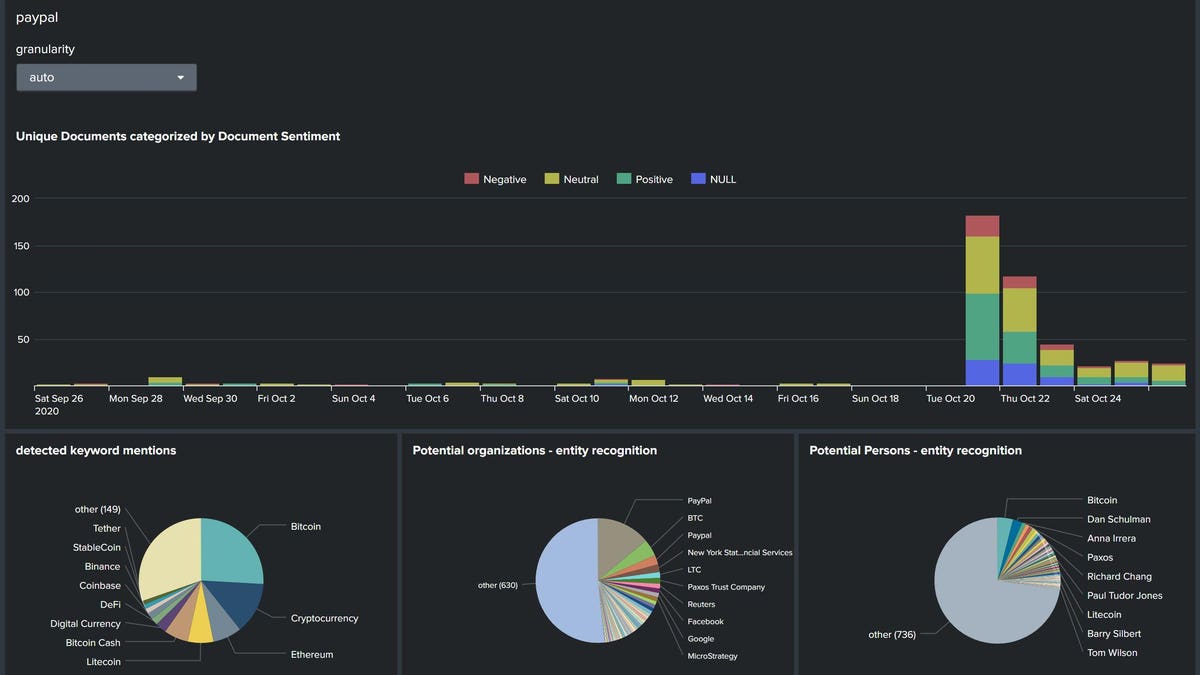 On June 23 of this year I reported on the rumors regarding PalPay and Venmo to enable Bitcoin buying/selling:

PayPal
officially announced its plans to allow its ~350 million users to buy and sell Bitcoin, Ethereum, Bitcoin Cash, and Litecoin. This news came amid a steady run-up in the crypto markets, with Bitcoin up ~80% YTD and 3% since its low in March:

This announcement has catalyzed discussion about the adoption and institutionalization of digital assets. There are opposing views from within the community in regards to both the significance of this news, and whether it is supportive or detrimental to the vision of a decentralized financial future.

If Python does overtake Java, it would mark the first time since Tiobe began its programming language popularity index in 2001 that Java would be outside the top two spots.

In September, Jansen said Java “is in real trouble” because of its year-on-year decline of 3.81 percentage points. Python, which was created in 1991, has seen its popularity ascend thanks to its use by data scientists and the rise of machine learning.

Microsoft has followed up its Python for beginners tutorials on YouTube with a new series aimed at teaching novice programmers the widely used JavaScript programming language.

Microsoft has launched a huge 51-part video course on YouTube to help programmers interested in building browser applications get their head around JavaScript and on the path to using relevant software development kits (SDKs) and JavaScript frameworks, such as Google’s Angular.

The JavaScript video series for beginners follows a similar structure to the 44-part Python series Microsoft launched on YouTube in September last year, offering students lessons in the language and AI tools that can be used in the Azure cloud.

“Our goal is to help show you enough JavaScript to give you the background needed to begin working through quick starts and tutorials focused on frameworks and SDKs using JavaScript,” Microsoft says on its GitHub page Scripting language PHP might not be that cool to know these days, but it is very valuable if you’re new to the workforce and looking for a tech job in the US, according to job search engine Indeed.

Job listings for entry-level PHP developer roles have increased a massive 834% since January 2020, making it the fastest-growing tech job across the industry, according to Indeed’s data.

With Wikipedia and WordPress among big sites running on server-side PHP code, it remains one of the most commonly used scripting languages for building websites and web applications, according to Stack Overflow – even if it is considered one of the “most-dreaded” languages to use.

According to Indeed, the US national average salary for an entry-level PHP developer with one to five years experience is $73,334. Other relevant skills for these roles include knowledge of CSS, HTML5,

Open-source programming language Python has become one of the few languages that won’t disappear anytime soon. It’s the top or one of the top two languages in most notable language popularity indexes, and even looks set to beat Java these days.

But 35-year-old Python does have its weaknesses. Not necessarily for the data-science and machine-learning communities built around Python extensions like NumPy and skippy, but as a general programming language.

Python is the top language according to IEEE Spectrum’s electrical engineering audience, yet you can’t run Python in a browser and you can’t easily run it on a smartphone. Plus no one builds games in Python these days.

To build browser applications, developers tend to go for JavaScript, Microsoft’s type-safety take on it, TypeScript, Google-made Go, or even old but trusty PHP. On mobile, why would application developers use Python when there’s Java,

C# has been instrumental in setting technical benchmarks for the developer landscape since its creation in 2000. Lead designer Mads Torgersen shares the secrets of its success with TechRepublic.

Two decades after its creation, C# continues to be one of the most popular and widely used programming languages in the world. Favored by millions for its versatility and easy-to-read syntax, the programming language has quickly become a go-to for web and mobile apps, game development, business applications and more.

While it shares a close heritage with Java – originally being designed as a rival to the programming language developed at Sun Microsystems (now Oracle) in 1996 – C# has evolved largely along its own path since its beginnings in 2001, not least thanks to extensive support from Microsoft.

SEE:
The best programming languages to learn in 2020

The Advanced Business Application Programming (ABAP) is a high-level programming language used for programming SAP Application Server. ABAP has a wide array of capabilities and efficiencies encompassed into it. Most of the developers and consultants use ABAP for developing SAP applications for their prestigious clients. After knowing the advantages of ABAP, each budding programmer would want to learn ABAP and excel in his/her career. If you are interested in learning the programming language, enroll in the online SAP ABAP Training Courses.

Pioneers in SAP say that it is always wise and smartest choice to use SAP’s own language ABAP to develop SAP applications. Let’s now explore the advantages of the ABAP programming language.

The power of Macros in ABAP is enormous

Learning programming isn’t as hard as some college graduates and experts make out. In fact, it is easy to become a reasonably proficient hobby programmer, within a short space of time, given the right mindset and grounding.

That mindset includes being able to break down and solve problems, something that can be taught, as well as a disposition towards experimenting. Trial end error plays a huge part in the learning process, as does a good understanding of the basics.

All programming languages share some elementary concepts. Once these are understood, learning the actual language becomes much easier, and as they are also transferable in many cases, understanding them will help learn almost any programming language.

Remembering that a computer program is just a bunch of instructions that tells a computer what to do, the four basic programming concepts are:

Since the existence of networked, automated information systems, the so-called “Cyber-Threat” has been known to be a major security and business continuity risk. One of the very first worms, the “Morris-Worm”, destroyed the e-mail infrastructure of the early internet. The Cyber Threat is not thoroughly understood even by many executives of the software industry, and the situation amongst the software user community is even worse. An Asian nation-state actor recently subverted the Google Mail login system by exploiting a weakness in internet explorer used by Google employees. The same Asian nation state is also suspected to have illegally downloaded the full design blueprints of the largest European jet engine manufacturer.

The Cyber Threat is real and may have grave long-term consequences for those at the “receiving end” of a cyber attack.

Unfortunately there is no “silver bullet” solution to this problem. Rather, a holistic solution comprising … Read More