President Donald Trump’s post-election purge is about to pivot to the Department of Homeland Security, where a top cybersecurity predicts his head will roll after he set up a ‘rumor control’ website to debunk false election claims.

Top U.S. cybersecurity official Christopher Krebs has told associates he expects to be fired by the White House, three sources familiar with the matter told Reuters. 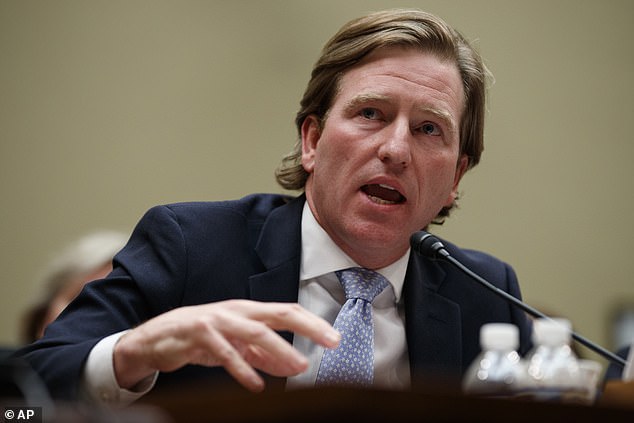 In this May 22, 2019 file photo, Department of Homeland Security Cybersecurity and Infrastructure Security Agency Director Christopher Krebs testifies on Capitol Hill in Washington. He said he expects to be fired 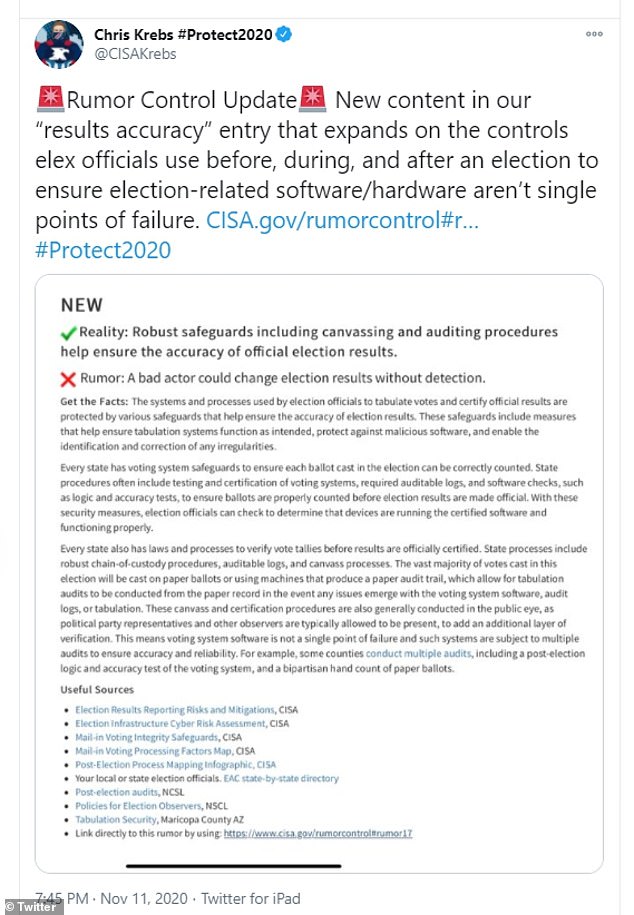 Krebs has been overseeing the ‘rumor control’ website, which has been debunking conspiracy theories

On Wednesday, he retweeted a post on technical exploitation of the vote 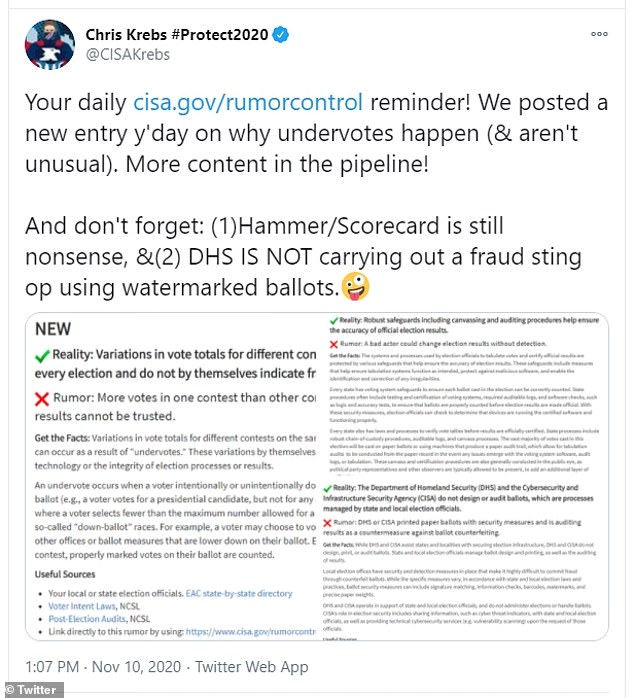 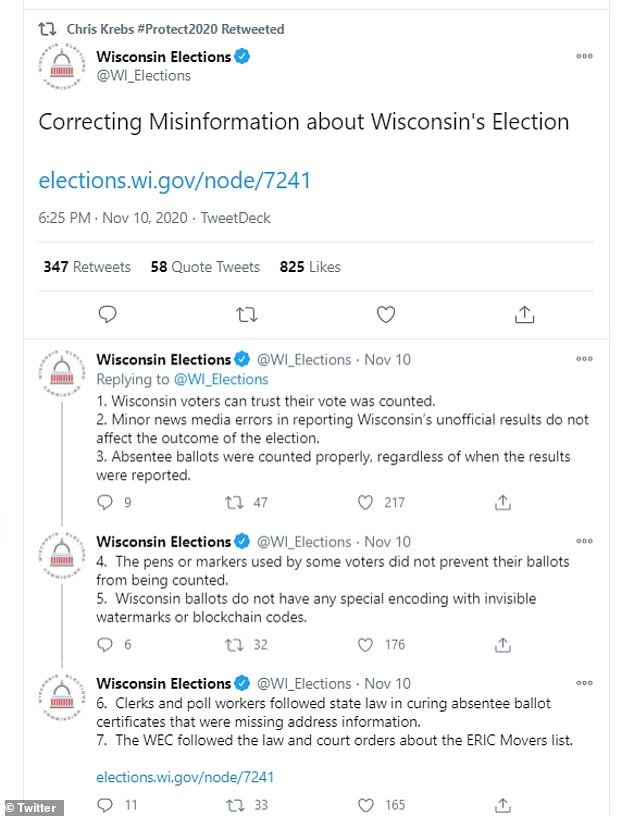 He also posted to collect ‘misinformation’ about Wisconsin, which has been called for Biden 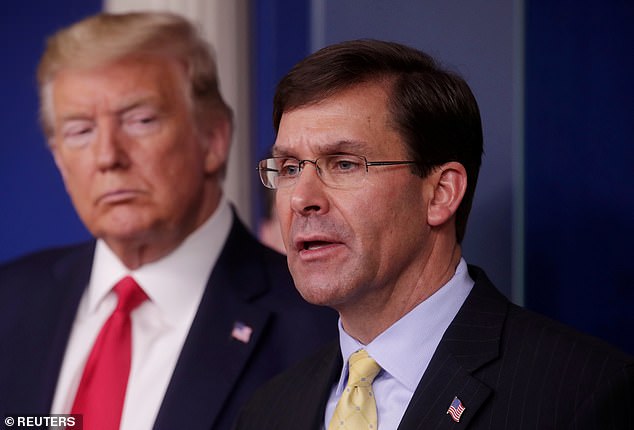 Separately, Bryan Ware, assistant director for cybersecurity at CISA, confirmed to Reuters that he had handed in his resignation on Thursday.

Ware told colleagues he is leaving ‘with much sadness…it’s too soon.’

Krebs has drawn widespread bipartisan praise for his handling of the Nov. 3 U.S. election, which generally ran smoothly despite persistent fears that foreign hackers might try to undermine the vote.

But he drew the ire of the Trump White House over a website run by CISA dubbed ‘Rumor Control’ which debunks misinformation about the election, according to the three people familiar with the matter.

The Rumor Control site was designed to take on any foreign misinformation – but ended up contradicting unsubstantiated claims being put forward by the president as he seeks to wipe away Biden’s lead in battleground states.

Some of Krebs’ tweets reveal why he may have been in hot water with the president’s team.

On Wednesday, he retweeted a writer and academic who wrote: ‘To my knowledge (and this is my field of expertise), no serious evidence has yet been found or presented that suggests that the 2020 election outcome in any state has been altered through technical exploitation. Period.’

He retweeted the Wisconsin Election Commission’s post ‘Correcting Misinformation about Wisconsin’s Election,’ as the president claims without evidence there has been fraud in Michigan, Wisconsin, Pennsylvania, Nevada, and other states he lost. Trump has also attacked the count in Georgia, where he is behind.

President Trump made the claim of election fraud that Twitter called ‘disputed,’ after he said election software ‘deleted’ millions of Trump ballots and caused thousands to be ‘switched’ from Trump to President-elect Joe Biden

A ‘rumor control update,’ posted between blaring siren updates, talks about ‘robust safety’ that ensures the accuracy of results.

‘New content in our “results accuracy” entry that expands on the controls elex officials use before, during, and after an election to ensure election-related software/hardware aren’t single points of failure,’ Krebs wrote.

The cite has also noted that ‘election integrity measures protect’ against dead people voting – a claim repeatedly put forward by Trump and his supporters.

Amid swirling internet rumors about ballots containing only a vote for Biden, but nothing down the ticket, the site notes that these ‘do not by themselves indicate fraud,’ that that such voting happens every election.

On Thursday, Trump blasted out unverified claims that 2.7 million votes for Trump were ‘deleted.’ He cited a report from conservative loyalist network OAN. It claimed 241,000 votes were ‘switched’ from Trump to Biden, and that 941,000 were deleted.

After Fox News commentators talked about a conspiracy theory that a computer named ‘Hammer’ and software called ‘Scorecard’ were ripping votes away from Trump and giving them to Biden, Krebs wrote: ‘This is not a real thing,’ Politico noted in a story that ran a day before Krebs said he was likely to be forced out. 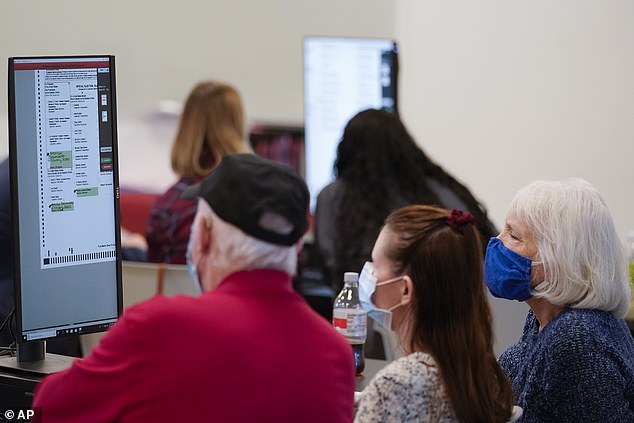 Officials work on ballots at the Gwinnett County Voter Registration and Elections Headquarters, Friday, Nov. 6, 2020, in Lawrenceville, near Atlanta. Biden leads in Georgia by 14,000 votes

The claim, however, has been widely debunked in the media and by state election officials who provided explanations of periodic errors in the massive counting process.

White House officials have asked for content to be edited or removed from the website, which has pushed back against false claims that Democrats are behind a mass election fraud operation. CISA officials have refused to delete accurate information.

Ware is one of several officials who have left national security-related posts since President Donald Trump lost the election to Joe Biden. Trump has yet to concede.

Ware did not provide details, but a U.S. official familiar with his matter said the White House asked for Ware’s resignation earlier this week.

The churn is being closely watched amid concern for the integrity of the transition from Trump to Biden. (Reporting by Christopher Bing. Additional reporting by Raphael Satter in Washington. Editing by Nick Macfie)