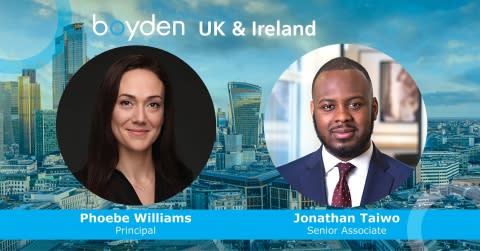 Boyden, a premier leadership and talent advisory firm with more than 70 offices in over 45 countries, announces the expansion of its team in the United Kingdom & Ireland with new hires Phoebe Williams and Jonathan Taiwo.

Commenting on the new arrivals, Nick Robeson, Managing Partner, Boyden UK & Ireland, said, “We are so delighted to welcome two highly talented individuals to Boyden’s team in the UK and

Leinster House, home of the Dail or Irish Parliament, in Dublin, Ireland

When Irish Finance Minister Paschal Donohoe delivered his bumper budget speech last month he was clear once again that the country’s corporate tax rate would remain as is.

But there was an acknowledgment that “change is inevitable” on an international level, referring to OECD negotiations, and that Ireland would feel the impact of that.

“Agreement at the OECD level would present challenges for Ireland as changes to the international tax framework would see a reduction in the level of profits taxable here,” he said.

“Failure to reach agreement at the OECD would also have negative consequences for the exchequer.”

Ireland’s headline 12.5% corporate tax rate — much lower than most industrialized nations — has been key to attracting many multinationals to the country, especially among tech giants with Apple, Google and Facebook having presences in the