BOSTON (AP) — A texting company run by one of President Donald Trump’s top campaign officials sent out thousands of targeted, anonymous text messages urging supporters to rally where votes were being counted in Philadelphia on Thursday, falsely claiming Democrats were trying to steal the presidential election.

The messages directed Trump fans to converge at a downtown intersection where hundreds of protesters from the opposing candidates’ camps faced off Thursday afternoon. Pennsylvania is a crucial battleground state where former Vice President Joe Biden’s supporters believe the outstanding ballots will put him over the top in the presidential election.

“This kind of message is playing with fire, and we are very lucky that it does not seem to have driven more conflict,” said John Scott-Railton, senior researcher at the University of Toronto’s online watchdog Citizen Lab. Scott-Railton helped track down the source.

The texts were sent using phone numbers leased to Sydney Miller is ready for the text messages from political campaigns to stop.

The 24-year-old medical student has already voted in Massachusetts, but the texts keep coming: from advocacy organizations, local candidates and even campaigns in other states where she’s never been registered to vote. She’s asked them to stop, without success.

“I feel like the only way out is for the election to be over at this point,” Miller said. “I’m just waiting for Wednesday morning.”

Voters’ phones have been vibrating and beeping for months with texts from political campaigns — mostly from volunteers they don’t know asking for money and votes — and many of them are about fed up.

Even before the coronavirus pandemic put a damper on in-person campaigning and volunteering, the text message was set to be a top political tool of the 2020 election season. New software allows one person to text many others 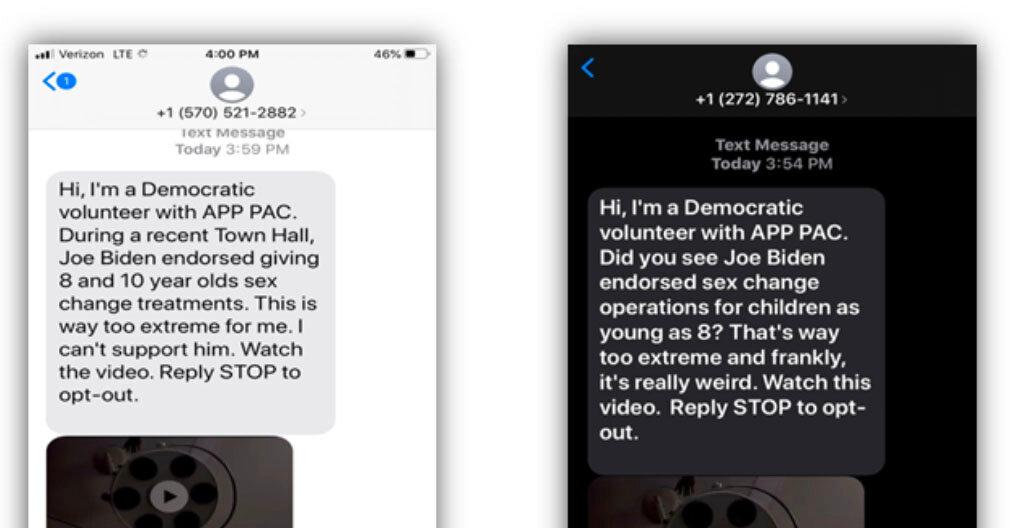 Since Friday, a similar video has also appeared on Facebook as many as 100,000 times — primarily in Michigan, a swing state in the Nov. 3 election.

What has been harder to pinpoint is how widely the video has been spreading through text messages.

Though companies like Facebook and Twitter have developed tools for tracking and policing disinformation on their social networks, texting activity is largely a free-for-all that receives little scrutiny from tech companies and government regulators.

“There is no way to audit this,” said Jacob Gursky, a research associate at the University of Texas at Austin. “Organizations are just collecting cellphone numbers from data brokers and mass-texting people.”

The video circulated in Michigan, Wisconsin and Pennsylvania