By Nandita Bose and David Shepardson

“If the very dangerous & unfair Section 230 is not completely terminated as part of the National Defense Authorization Act (NDAA), I will be forced to unequivocally VETO the Bill when sent to the very beautiful Resolute desk,” Trump tweeted late on Tuesday.

Section 230 of the Communications Decency Act protects internet companies from liability over content posted by users and has been under attack from Trump and Republican lawmakers, who have accused tech companies of stifling conservative voices.

The sweeping $740 billion NDAA sets policy for the Department of Defense. It “If the FCC grants the administration’s proposal, no websites or platforms would be able to set their own standards for their online communities,” explained Gaurav Laroia, senior counsel for the grassroots media and democracy group Free Press. “It would seriously threaten the ability of marginalized groups to organize and express their views without the government forcing them to allow racist and sexist interlopers into every conversation. It would leave sites little choice but to drown in posts from bigots, propagandists, conspiracy theorists and trolls.”

Vigilance is required on every front to assure that Trump does not do more damage before Jan. 20. But defenders of honest discourse and the democracy that extends from it should be especially alert to the threat posed by Trump’s pressuring of his FCC minions might crash the internet in response to a presidential fit of pique.

John Nichols is associate editor of The Capital 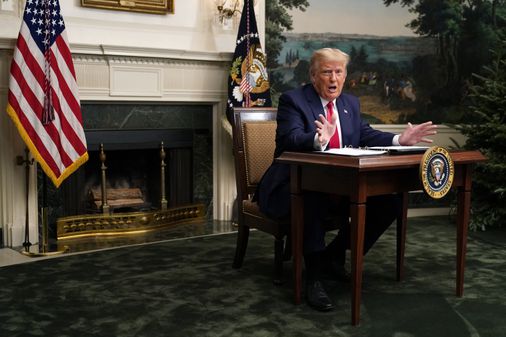 The leader of the free world sat behind what appeared to be a wooden end table of some sort on Thursday, the first time he took questions from reporters since losing the presidential election. At the diminutive table, Trump conducted a video call with troops for Thanksgiving and responded to reporters’ questions about his baseless allegations of election fraud. At one point, Trump snapped at a Reuters White House correspondent, calling him a “lightweight” and saying “don’t talk to me that way” in a moment of pique.

But the internet was all about the desk.

The smooth brown tabletop, four shortish legs, and giant presidential seal barely contained Trump’s 6-foot, 3-inch frame in front of a gaggle of journalists. That, coupled with the strangely unkempt green shag carpet, giant microphone stand, and an untrimmed Christmas tree, made for 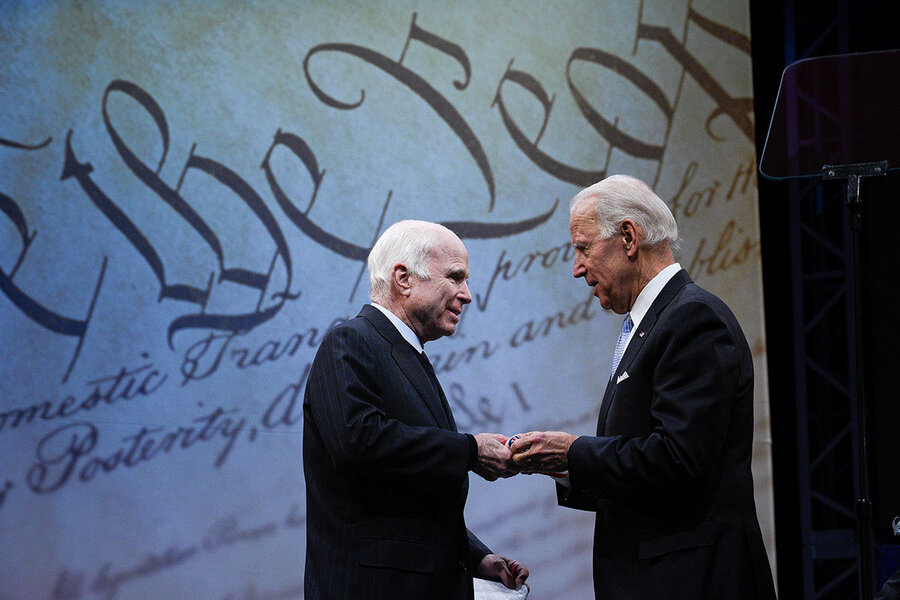 The late Sen. John McCain would have been proud of his friend President-elect Joe Biden. The two went back decades – back, even, to before Mr. McCain’s election to Congress. In the late 1970s, when the Arizona Republican was the Navy’s Senate liaison, he used to carry the young Senator Biden’s bags on overseas trips.

“That was almost 40 years ago, and by God, I still resent it,” Senator McCain joked at a 2016 event celebrating their enduring bipartisan friendship.

They were the recipients of an award for “civility in public life,” a poignant event. But has civility, I wondered, become so rare that notable practitioners merit a prize? Both men were appearing in person, so I decided to go. Here’s the story.

Now, civility seems to be in even shorter supply. The presidential election of 2020 was the ugliest in memory, and it’s still winding down. On

Two comedians have purchased and set up a website for DonaldJTrump2024.com. The site largely mocks President Donald Trump for losing the 2020 presidential election and refusing to concede.

© Tasos Katopodis/Getty
Two comedians have purchased DonaldJTrump2024.com to mock President Donald Trump about his loss in the 2020 election. In this November 26, 2020 photo, Trump golfs at Trump National Golf Club on in Sterling, Virginia.


The website looks almost identical to Trump’s actual website, DonaldJTrump.com, even using the same main image and font. However, the comedians’ website calls Trump a “loser” six times and has a fictional quote from Trump stating, “I lost the 2020 election.” None of the website’s buttons are linked to any other webpages, essentially making the site just a standalone page.

2020 Election By The Numbers

The comedians, Jason Selvig and Davram Stiefler who go by The Good Liars, established the 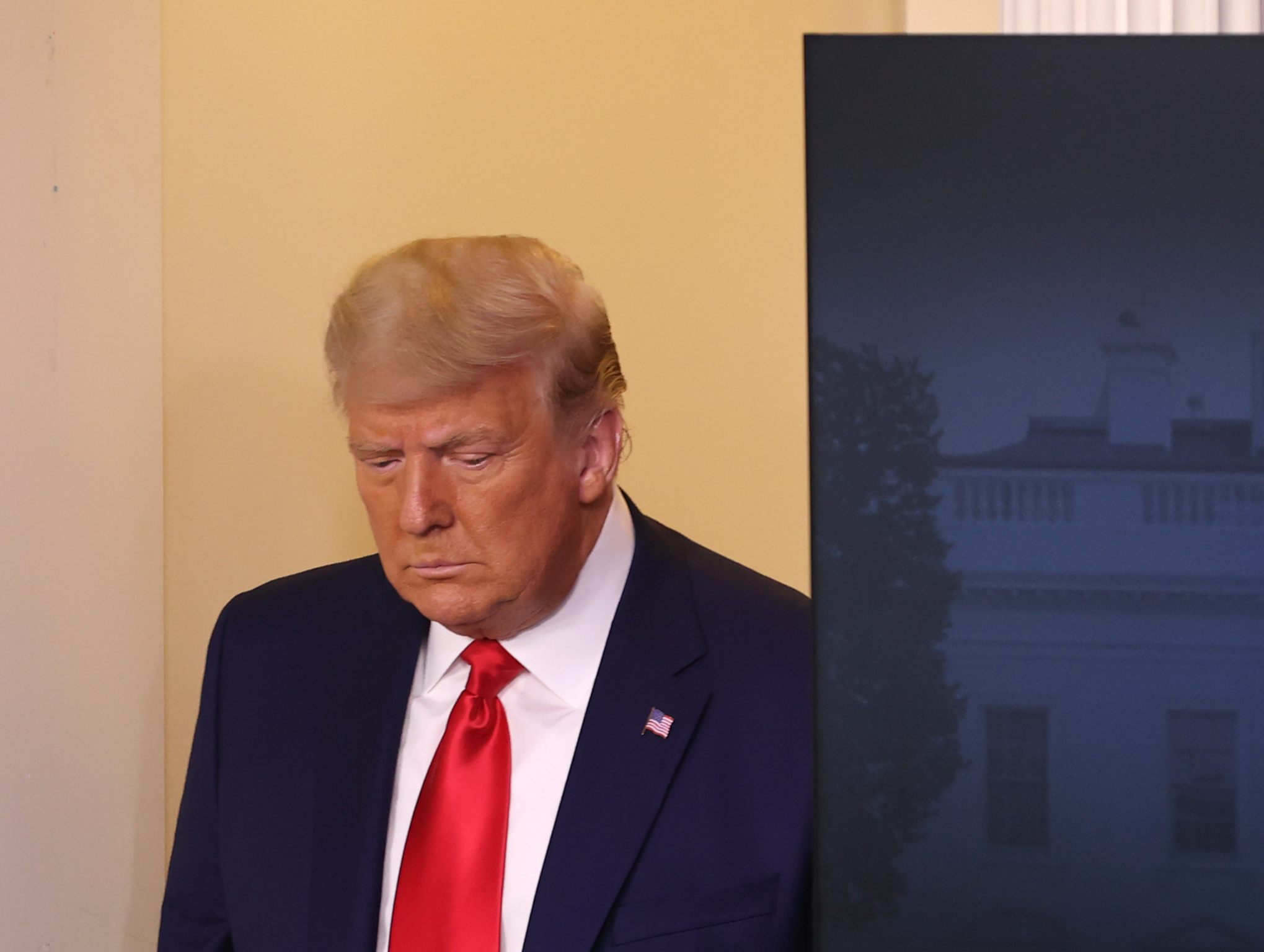 Having lost this election, a lot of people are asking the question: what next for Donald Trump?

The idea has been floated that he might run again for president in 2024.

The constitution allows it. Presidents are only stopped from running a third time if they’ve served two terms prior to that.

If he chose to run, according to Politico, he’d be in with a very good shot of winning the Republican primary and becoming their nominee.

If that’s how things go, Trump will need a campaign page.

But two comedians, preempting his 2024 run, have outfoxed the president by buying a domain he could potentially use.

The Good Liars, a comedy group run by Jason Selvig and Davram Stiefler, have taken credit for purchasing DonaldJTrump2020.com.

The hilarious prank now means that the domain links to a website celebrating Trump’s 2020 defeat.

Pranksters claimed the domain DonaldJTrump2024.com and plastered it with messages including “Trump Lost the Election.”

Jason Selvig and Davram Stiefler, a comedy duo also known as “The Good Liars,” said on Twitter on Wednesday that they had the domain name.

The website resembles President Donald Trump’s legitimate website, DonaldJTrump.com, but has subheadings that mock his defeat in this year’s election, including “Trump Lost” and “Trump

Pranksters have claimed a website domain that could have been used by President Trump for a potential presidential run in 2024, plastering it with messages including one which reads “Trump lost the election.”

Comedy duo Jason Selvig and Davram Steifler, also known as “The Good Liars,” wrote on Twitter on Wednesday that they had claimed the domain name DonaldJTrump2024.com.