A lawyer representing President Donald Trump in his legal battle challenging the outcome of the presidential election recently said that some congressional Democrats raised concerns in the past about the trustworthiness of election software used in several states.

© Chris McGrath/Getty
Rudy Giuliani, a lawyer for President Donald Trump, speaks to the media at a press conference held in the back parking lot of Four Seasons Total Landscaping on November 7, 2020, in Philadelphia, Pennsylvania. On Sunday, Giuliani and another attorney for Trump, Sidney Powell, spoke with Fox News’ Maria Bartiromo to discuss allegations of widespread voter fraud during the 2020 election.


Election officials use Dominion Voting Systems in 28 states, including several key battleground states. Members of Trump’s legal team have alleged that the company uses voting software that can be controlled by operators overseas to “steal” elections, much as they alleged the election was stolen from Trump.

The site began to link to the president this week after it was announced on Saturday that Joe Biden had won the election.

It is not clear who runs the site, but the domain has been registered since 1997, and has linked to multiple celebrities and politicians throughout its run, including 2000 Presidential candidate Al Gore, Kanye West and now Trump.

The site does not make money on ads and doesn’t receive too much traffic, yet it has become one of the Internet’s longest running ‘trolls,’ according to the Washington Post.

Trump frequently calls his opponents ‘losers,’ even going as far to say the name about military servicemen, according to The Atlantic.

President Donald J. Trump will leave the White House in January with a legacy of railing against the tech world despite relying on the reach of social media platforms including Facebook and Twitter to spread misinformation and inflame the public.

On Saturday, multiple news outlets called the election for Democratic nominee and former Vice President Joe Biden, who captured 279 electoral votes, after both Pennsylvania and Nevada moved into the blue even as a few states continue to wrap up their vote counting. Trump’s loss capped off a chaotic and unprecedented campaign that took place under the shadow of the coronavirus pandemic, which has infected more than 9.8 million people and killed more than 237,000 in the US. 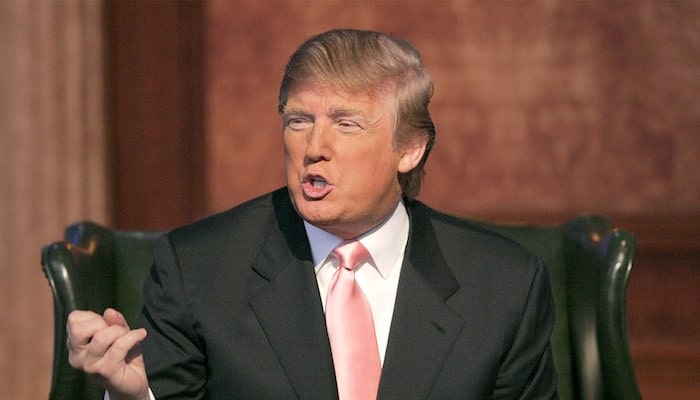 Well, the United States’ 2020 election day has quickly turned into an election week. While we wait to see if Joe Biden or Donald Trump win the remaining key states, the internet has been sharing plenty of thoughts, tweets and memes since Tuesday.

Now, the internet is using one of Trump’s popular catchphrases against him as voting results across the country continue to pour in.

Read more: Johnny Depp has been forced to exit the ‘Fantastic Beasts’ franchise

At this time, the world is still waiting to see if Biden or Trump will win the presidency in the United States. Currently, key votes are still be counted in Nevada, Arizona, North Carolina, Georgia, Alaska and Pennsylvania. Although Biden is leading in the majority of these crucial states, it’s a waiting game to see who will end up with the final electoral college votes that are up for The company labeled a tweet from Trump declaring victory in several states where results had not yet been finalized, as well as in Michigan, where news outlets had already projected a victory for Biden. The company also quickly slapped warning boxes over several of the president’s tweets making baseless claims of election fraud, as Trump’s campaign mounted a blitz of legal challenges over the election process. Twitter prevented retweets or likes of those tweets, warning they “might be misleading about the election.”

Meanwhile many of the same claims also appeared on Facebook, which also applied labels at the bottom of the posts in most instances to provide greater context about the U.S. election process. However, Facebook didn’t prevent people from liking or sharing the posts, which meant they could still spread across its much larger service. 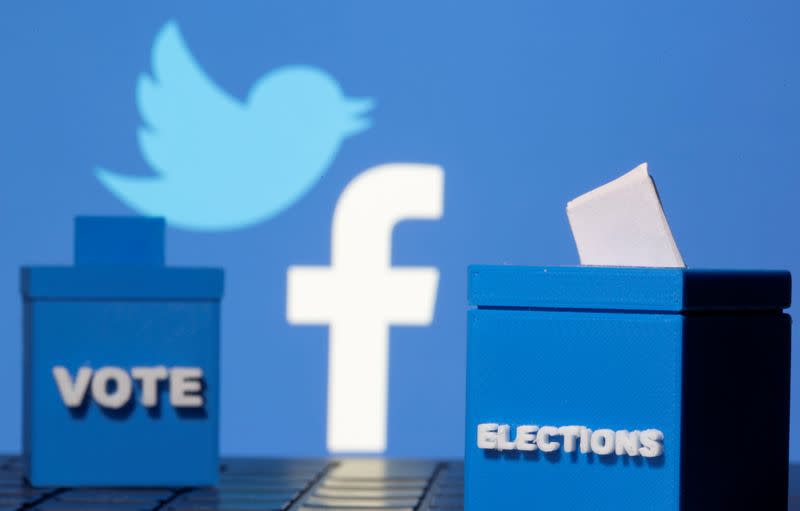 Here is a sampling of how the companies handled Trump’s posts starting on election night:

Facebook placed a label below the post: “Votes are being counted. The winner of the 2020 U.S. Presidential Election has not been projected.”

By Elizabeth Culliford and Jack Stubbs


LONDON (Reuters) – Facebook Inc and Twitter Inc flagged some of President Donald Trump’s posts on the U.S. election as votes were still being counted, in a real-time test of their rules on handling misinformation and premature claims of victory.


The two companies have been under fierce scrutiny over how they police rapidly spreading false information and election-related abuses of their platforms. In the weeks before Tuesday’s vote, both vowed action on posts by candidates trying to declare early victory.

Twitter hid a Trump tweet that claimed “we are up BIG, but they are trying to STEAL the Election” behind a label that said it was potentially misleading. The company also restricted users’ ability to share the post. 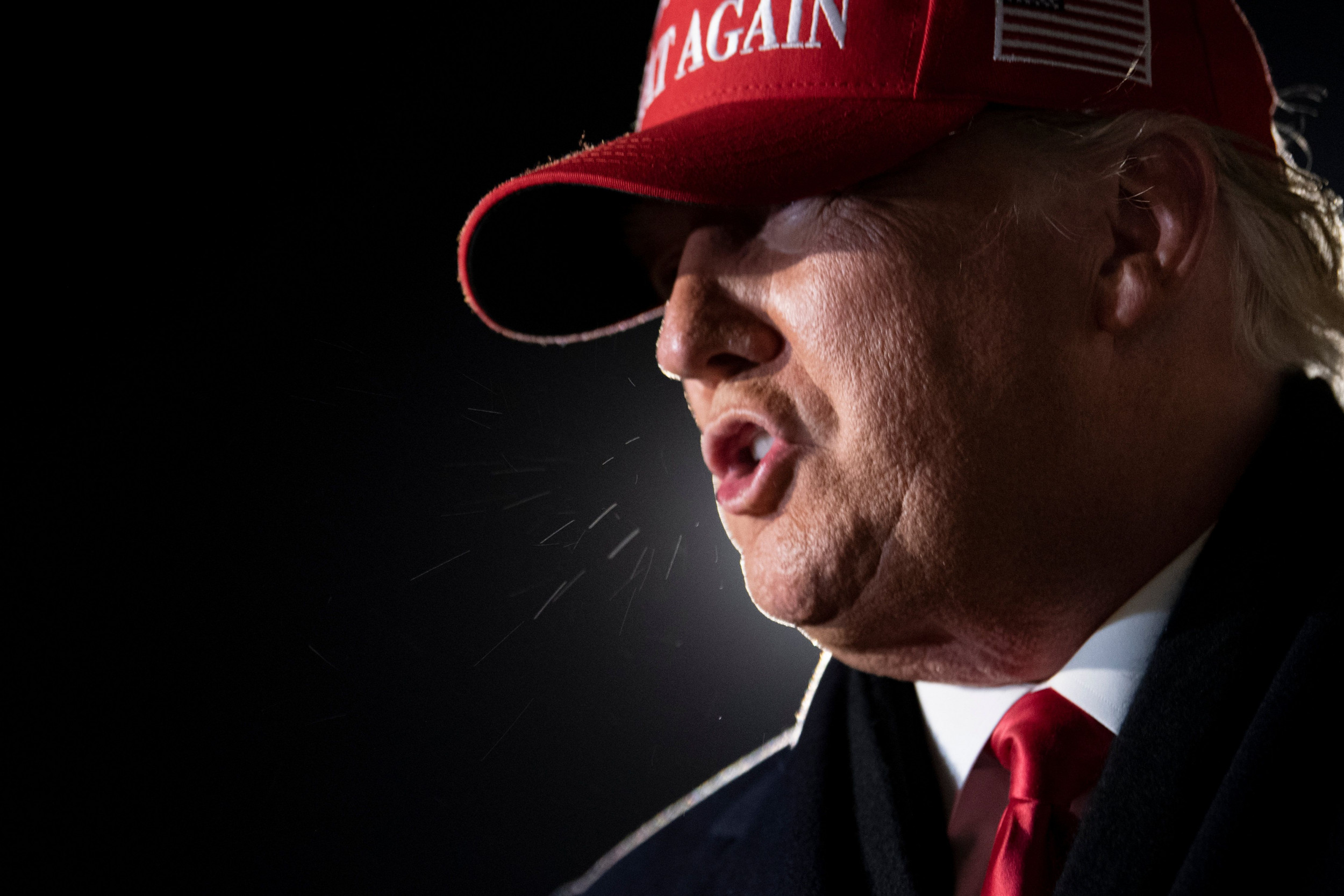 Donald Trump has long favored Twitter as a method to circumvent the media, criticize political rivals and speak directly to his base. “I love Twitter…. it’s like owning your own newspaper—without the losses,” he tweeted in 2012.

In the years since that post, his following on the platform has ballooned to more than 87 million accounts and his posts still regularly dominate the news cycle. Trump created his profile in May 2009 and as of today has posted more than 55,000 tweets.

Over the past four years, since winning the White House in November 2016, a database called the Trump Twitter Archive shows he has tweeted more than 25,000 times—with the majority of his top 30 most-liked updates published in 2019 and 2020.

With close to 1.9 million likes, Trump’s most-favorited tweet throughout his term remains his announcement that he and the First Lady tested positive for COVID-19, which was